Multiple Sclerosis, most commonly known as MS, is a condition that affects your spinal cord and brain. It is an abnormal response of the body’s immune system against the central nervous system. This means that your immune system damages or destroys the fatty substance that surrounds and protects our nerve fibres called myelin.

It presents a range of symptoms such as issues with arm and leg movement, vision, sensation and balance. Although the cause of MS is not known, it is thought that triggers can be genetic susceptibility, abnormalities in the immune system as well as environmental factors. The severity of the condition can vary, but in many cases it is possible to treat symptoms.

What does an MS diagnosis mean?

An MS diagnosis is often overwhelming as people begin to wonder what happens next, how it may change their life and when and who to tell. With the diagnosis of a lifelong condition it is normal to feel shocked, in denial, anxious, angry and lonely, but it is also normal to feel a sense of relief and acceptance if you have spent a long time trying to get to the bottom of your symptoms.

After diagnosis you will be assigned a MS team, including an MS nurse, to discuss disease modifying therapy and other aspects of your overall health and well-being to prepare for your MS journey. Many health professionals also recommend tracking your symptoms after diagnosis so you’re on top of it’s progression and get receive the correct support and treatment.

To better understand how MS can change people lives and how trikes can help we spoke with Sarah.

Sarah told us that she’d had orthopaedic problems all her life but as these issues progressed a scan revealed she in fact had MS. Her symptoms were making it hard for her to leave the house and be active because she was having difficulty walking and had balance issues. Similar to many other people living with MS, Sarah began to feel stuck at home; it was especially challenging that she was unable to join her husband and son on nice family walks as she struggled to even walk for short periods of time without the use of crutches.

With lifelong conditions such as MS, it is common for people to feel quite low as symptoms progress. However, there are many treatments and adjustments you can make in your life that can help you manage symptoms and live a positive, full life. Sarah recognised that her diagnosis was beginning to affect her mental wellbeing as she felt a loss of freedom and independence, so she began exploring what options were out there to help her be able to get around easier. She came across Jorvik and was particularly interested in what they had to offer because they aim to create trikes for everyone, especially to support those with life-limiting diseases.

Not only did Sarah choose a Jorvik tricycle because of the story behind the company, but none of the competitors offered an electric and foldable tricycle. Although she doesn’t always use the electric feature, these were two important factors when she was purchasing a tricycle. She made the two hour journey to their showroom in York, where they were able to show her how to fold the tricycles and put them in the car, as well as getting to test a trike out for herself. While the steering and balance took a bit of getting used to, Sarah and her family are now able to go for family bike rides together! 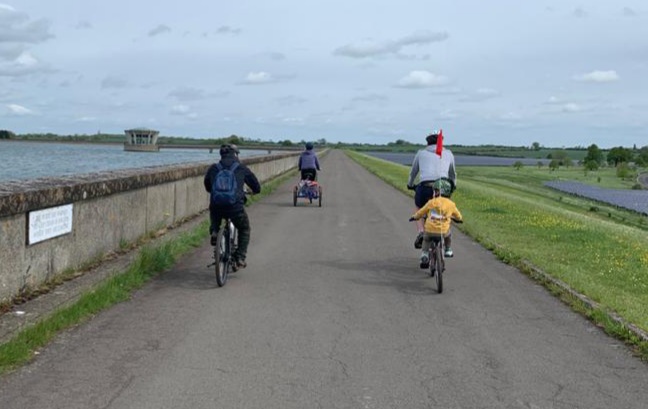 Aside from improving her family life, she believes purchasing a Jorvik trike has greatly improved her mental health as it has enabled her to get out and do something positive for herself, giving her a new sense of freedom without feeling restricted by MS. Sarah has been able to take her trike on lots of different cycle routes and public parks with her friends, for example Rutland Water, where she cycled around 14 miles. She’s also really enjoyed helping others with MS by inspiring them to also invest in tricycles; she cycled 40 miles to raise awareness of her condition and how trikes have helped her as well as raising money for MS Trust.

Get in Touch?
Splits uw aankoop in 3 renteloze betalingen